Is vaccine efficacy a statistical illusion?

1 Dec 2021 upate: see update to this article showing that the same statistical illusion of efficacy occurs if newly vaccinated deaths are classified as unvaccinated.

To evaluate the risk/benefit of a vaccine for treating a virus, such as covid-19, we can compare the all-cause mortality rate of vaccinated against unvaccinated people on a periodic basis. If the mortality rate for those vaccinated is consistently lower than that for unvaccinated then we might conclude the vaccine must be beneficial.

Imagine that a placebo rather than a vaccine is quickly rolled out to a population of one million people of similar age and health. Let’s assume the weekly non-virus mortality rate for this population is 15 per 100,000 (100k), so we would expect about 150 out of the million to die in any given week. Because the placebo changes nothing, the mortality rates for both vaccinated and unvaccinated average the same 15 per 100k, each week every week. Hence, on average, what we should observe – as the ‘vaccination’ programme rolls out to most of the population - is shown in Table 1. Notice that the placebo vaccine roll-out programme is enacted at pace and the cumulative percentage of the population vaccinated rises to 98% within 12 weeks.

Table 1 Roll out of placebo ‘vaccine’. No observed differences in mortality rates (no population growth and each week total population reduced by previous week’s deaths)

Now suppose there is a one-week delay in the reporting of deaths. Such delays are routine in statistical reporting of mortality and vaccine data. Then the data reported by the authorities is different from reality, here shown in Table 2, which is the same as Table 1 but where the death totals are simply ‘shifted’ down one week.

(Update) Here's a 60-second video showing how to this is done in Excel and proving there are no tricks involved other than simply shifting the deaths down by one week: 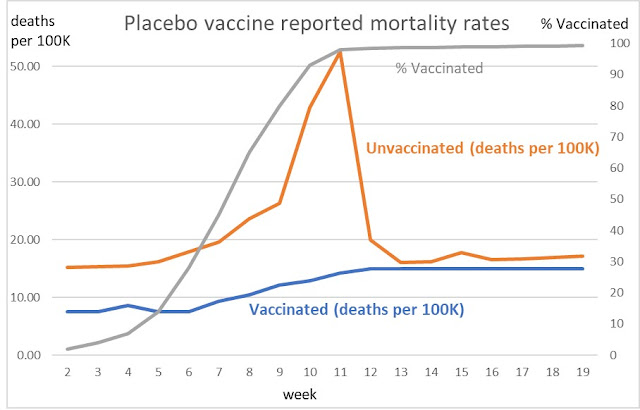 We might conclude that those who remain unvaccinated look to be suffering much higher levels of mortality than the vaccinated. The reporting delay therefore creates a completely artificial impression that the vaccine must be highly effective.  In fact, it looks like a magic ‘cure all’ wonder drug!

The fact that the mortality rate of the unvaccinated peaks when the percentage of those vaccinated peaks should ring some alarm bells that something strange is going on (unless there is independent evidence that the virus was peaking at the same time).

While the placebo vaccine example was purely hypothetical, Figure 2 shows the vaccinated against unvaccinated mortality using the data in the latest ONS report mortality in England by Covid-19 vaccination status (weeks 1 to 38)[1], complemented by NIMS vaccination survey data (up to week 27 only). Here we show other-than covid mortality to remove the virus signal. 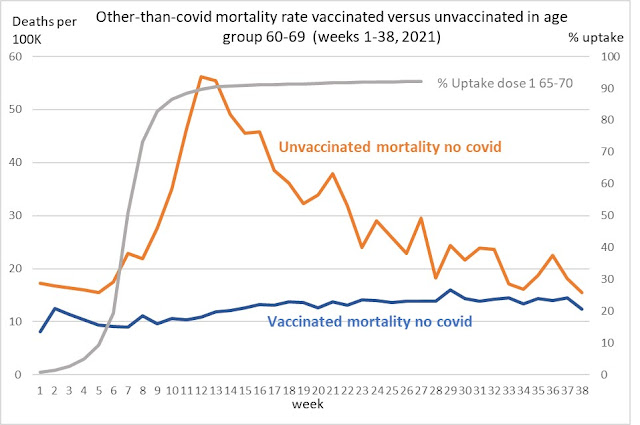 Note that we see the same features as the shifted graph in Figure 1. In other words, a perfectly reasonable explanation for what is observed here could be that there is no difference in mortality rates between vaccinated and unvaccinated and the mortality differences are simply a result of a delay in death reporting. Moreover, given we have removed covid deaths (which were only a small percentage of all-cause deaths in the reported data) we get a near identical result for non-covid mortality to that which would result if the vaccine were a placebo! Thus, we appear to have created a statistical illusion of vaccine efficacy.

It is important to note that we are not claiming the death reporting is delayed in the ONS data. In fact our work on this is ongoing and we believe that the most plausible explanation is misclassification and underestimation of proportion of unvaccinated.

These same patterns are also observable in the 70-79 and 80+ age groups (with the mortality peaks for the unvaccinated appearing at different weeks because these age groups received vaccinations earlier). This strongly suggests that what we are observing is a genuine statistical illusion unexplainable by any real impact of the vaccine on mortality rates.

It is also important to note that even if the actual mortality rate for the vaccinated was higher than that of the unvaccinated, where the vaccine was causing death, as a side effect, we would still likely observe the same illusion.

To see this effect let’s revisit our placebo vaccine example and make a small change to Table 1 where instead of a mortality rate of 15 per 100k for the vaccinated, suppose it is 17 per 100k (a rise in mortality of approximately 13%). So, the placebo vaccine is killing two more people per 100k and gives no mortality benefit otherwise. In this scenario the reported mortality rate for the ‘deadly placebo’ is compared to the first ‘placebo’ scenario, in Figure 3. Even here we see the illusion that the mortality rate for the vaccinated is lower than unvaccinated. Both scenarios are the opposite of reality, and both look interchangeable. This means the chance of picking up a vaccine side effect signal is close to impossible and instead the illusion is created of vaccine efficacy.

The illusion of declining vaccine efficacy

Finally, it is important to note that the same statistical illusion applies to all measures of vaccine efficacy whether they be cases, hospitalizations, or deaths. In fact, replacing the number of deaths in Table 1 with number of cases, with a one week reporting delay, would result in vaccine efficacy rates as shown in Figure 4. 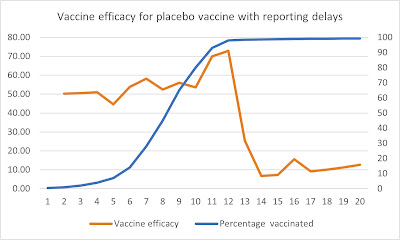 This occurs when the actual placebo vaccine efficacy for cases is zero.

This reporting bias is one type of bias that might be called ‘reporting lag censoring’, a phenomenon whereby structural or process factors systematically interfere with when data is handled and reported with the consequential effect that it is then misinterpreted, leading to false conclusions.

UPDATE: Here is a 25 minute lecture explain the background and ongoing work: