This makes interesting reading for anybody who still believes the Government 'case' data and the claim that just because you don't have any COVID-19 symptoms it doesn't mean you aren't in danger (and a danger to others).... 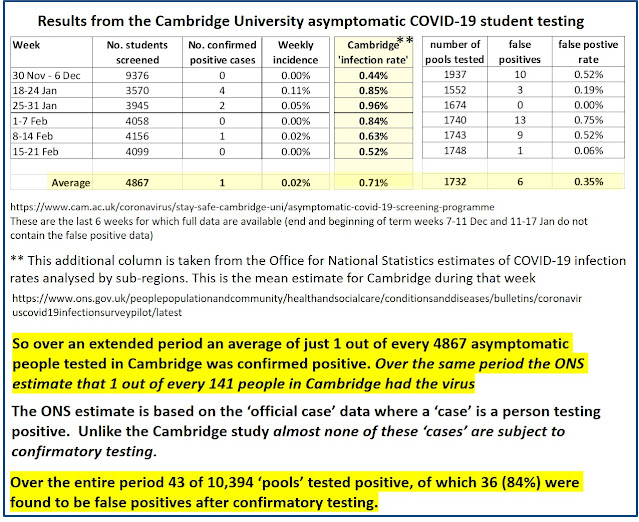 If the ONS infection estimates for Cambridge (0.71%) are accurate, then during an average week in this period about 916 people had the virus and 128,084 did not.

But if the “1 in 3” claim is correct about 305 of the 916 people in Cambridge with the virus were asymptomatic and 611 had symptoms.

That means the “1 in 3” claim and the ONS estimates cannot both be correct.

If the “1 in 3” claim is correct, then the maximum possible value for the infection rate is at most 0.062% and not 0.71% as claimed. So the ONS estimated infection rate would be 11 times greater than the true rate. (Formal proof below) 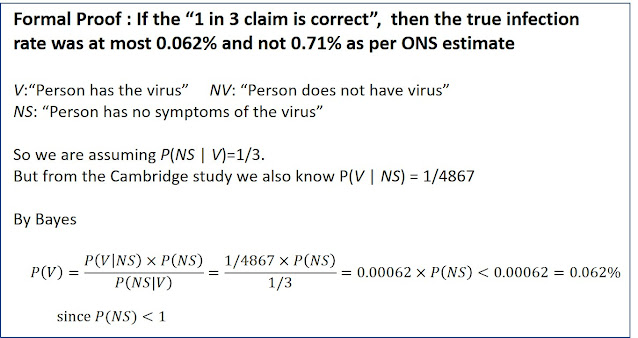 Also: This Government report says 9,480 of 2,372,358 lateral flow tests in UK 28 Jan - 3 Feb were positive. It is assumed almost all lateral flow tests are on people without symptoms. Given the false positive rate for these tests that's about 1 in 1587 true positives. In the same period the ONS estimated UK infection rate was 1 in 77.

Obviously all of this data is on asymptomatics tested, so we expect the percentage testing positive to be less than the overall infection rate. However, this data still massively contradicts Government claims about asymptomatics as explained here.

And, of course, we have very solid evidence that the number of 'cases' based on PCR testing are inflated.