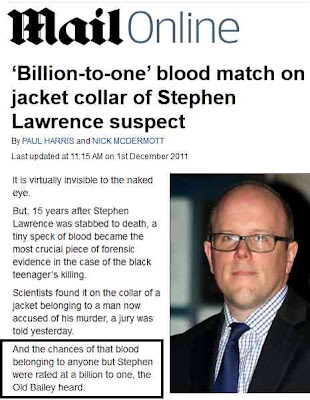 If you believe the 'respectable' media reporting of the Stephen Lawrence case then there were at least two blatant instances of the prosecutor fallacy committed by expert forensic witnesses.


"..the blood stain on the accused's jacket was caused by fresh blood with a one-in-a-billion chance of not being victim Stephen Lawrence's."

Numerous other reports contained headlines with similar claims about this blood match. The Daily Mail (above) states explicitly:


".. the chances of that blood belonging to anyone but Stephen were rated at a billion to one, the Old Bailey heard."

Similar claims were made about the fibres found on the defendants' clothing that matched those from Stephen Lawrence's clothes.

If the expert witnesses had indeed made the assertions as claimed in the media reports then they would have committed a well known probability fallacy which, in this case, would have grossly exaggerated the strength of the prosecution evidence. The fallacy - called the prosecutor fallacy - has a long history (see, for example our reports here and here as well as summary explanation here).  Judges and lawyers are expected to ensure the fallacy is avoided because of its potential to mislead the jury. In practice the fallacy continues to be made in courts. However, despite the media reports the fallacy was not made in the Stephen Lawrence trial. The experts did not make the assertions that the media claimed they made. Rather, it was the media who misunderstood what the experts said and it was they who made the prosecutor fallacy. What is still disturbing is that, if media reporters with considerable legal knowledge made the fallacy then it is almost certain that the jury misinterpreted the evidence in the same way. In other words, although the prosecutor fallacy was not stated in court, it may still have been made in the jury's decision-making.

To understand the fallacy and its impact formally, suppose:

What the media stated is that the forensic evidence led to the probability of H (given E) being a billion to one.

But, in fact, the forensic experts did not (and could not) conclude anything about the probability of H (given E). What the media have done is confuse this probability with the (very different) probability of E given H.

"The blood found on the jacket matches that of Lawrence and such a match is found in only one in a billion people. Hence the chances of seeing this blood match evidence is one in a billion if the blood did not come from Lawrence".

In theory (since there are about 7 billion people on the planet) there should be about 7 people (including Lawrence) who would have the same matching blood DNA to Lawrence. If none of the others could be ruled out as the source of the blood on the jacket then the probability of H given E is not one in a billion as stated by the media but 6 out of 7. This highlights the potential enormity of the fallacy.

Even if we could rule out everyone who never came into contact with Dobson that would still leave, say, 1000 people. In that case the probability of H given E is about one in a million. That is, of course, a very small probability but the point is that it is a very different probability to the one the media stated.

The main reason why the fallacy keeps on being repeated (by the media at least) in these kind of cases is that people cannot see any real difference between a one in a billion probability and a one in a million probability (even though the latter is 1000 times more likely). They are both considered 'too small'.

Finally, it is also important to note that the probabilities stated were almost meaningless because of the simplistic assumptions (grossly favourable to the prosecution case) that there was no possibility of either cross-contamination of the evidence or errors in its handling and DNA testing. The massive impact such error possibilities have on the resulting probabilities is explained in detail here.
at 13:45