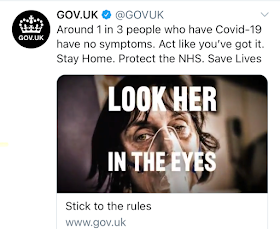 16 Feb 2021  DRAFT ONLY: This article is under review and will be updated.

28 Feb:  There is also an update on the Cambridge study here

One of the major messages currently being pushed everywhere by the UK Government about COVID-19 is the claim that "1 in 3 people who have the virus have no symptoms".

A person is classified as having COVID if they get a positive test result and it has long been conjectured that (for PCR tests) many of these are false positives especially for people who have no symptoms and where there was no confirmatory test (the new evidence below provides further confirmation of this). So, clearly, it is possible that a large proportion of people classified as having the virus (as opposed to actually having the virus) have no symptoms. But, the new evidence suggests that either the "1 in 3" proportion is massively exaggerated, or the 'case' numbers are massively exaggerated. Or (likely) a combination of both. They certainly cannot both be true. In fact, if we accept that the Government case numbers really are people who have the virus then (based on the new evidence) it turns out that between 1 in 56 and 1 in 13 people who have the virus have no symptoms - very different from the Government "1 in 3" claim. Conversely, if the "1 in 3 claim" was really correct, than it turns out that the proportion of people with the virus during 1-7 Feb was not 1.25%, i.e. 1 in 80 as claimed, but between 0.09% and and 0.29% (i.e. between  1 in 1,111 and 1 in 345).

To understand what it going on here, it is important first to note that many people who see a statement like

"1 in 3 people who have the virus have no symptoms"

assume this is the same as:

"1 in 3 people who have no symptoms have the virus".

Perhaps the Government "1 in 3" message was phrased in the way it was to deliberately exploit this very common misunderstanding.  Obviously, it is not the case that "1 in 3 people who have no symptoms have the virus", because even if as few as a half the UK population does NOT currently have COVID-symptoms, then there would be over 11 million people who have the virus but no symptoms. This is clearly wrong, since the ONS estimate for total active cases for the week ending 6 Feb is that less than one million people (1.25% of the population) have the virus (in any case, as we explain below, we believe the 1.25% is too high anyway because of the inclusion of false positives).

The new evidence that suggests that both the case numbers, and the claim that "1 in 3 people who have the virus have no symptoms", are exaggerated comes from an ongoing study at Cambridge University. This study tests students without symptoms and, for the week of 1-7 Feb, they reported that a total of 4058 students with no symptoms were tested. None of these students were confirmed as positive, although critically (as we discuss below) there were a significant number of false positives.

Here is a screenshot of the summary results:

Can we conclude that the true percentage of asymptomatic people with the virus (in the week 1-7 Feb) is 0%.  No, because this is only one sample from a large population. If we use all the recent Cambridge data (6 cases from 11,573 people with no symptoms) then we could assume that about 0.052% of people with no symptoms have the virus. However, that data was for different weeks and it is not clear how many of the same students were tested. Fortunately, there is another relevant publicly available dataset for the week of 1-7 Feb that we can use - the data on Premiership football players and staff  where we find that only 2 out of 2970 tested positive. Unlike the Cambridge study we cannot be certain that all of the 2970 players and staff tested during the week of 1-7 Feb had no symptoms. Given that footballers are among the few in the population not subject to social distancing it could be argued that (except for people in care homes and hospitals) we ought to see a higher infection rate among them compared to most of the population. If the ONS estimate of 1.25% of the population having the virus during the week of 1-7 Feb were accurate then we might expect to have found 37 cases rather than 2.  It is conservative to assume that most of the 2970 did not have symptoms. We do not know if either of the 2 positive cases had symptoms. If they did  then (together with the Cambridge study) we could conclude that, of over 7000 people with no symptoms not a single one tested positive. So, let us conservatively assume that the 2 positive cases did not have symptoms. Then, combining the Cambridge and Premier League data we have 2 ‘cases’ from 7,028 people with no symptoms, i.e. 0.0285% of those with no symptoms has the virus.

The two samples are, of course, not representative of the population. However, this sample bias should surely favour the Government claim, because if any group are really likely to have COVID-19 but no symptoms it is surely young and fit people.

On the other hand if we use the Government "1 in 3" claim, we can also uses Bayes Theorem to estimate the probability a person has the virus. The (Bayesian) 95% confidence interval estimates this probability to be between 0.09% and 0.29% with a mean value of 0.2%, which would suggest the claimed 1.25% infection rate is exaggerated by a factor of over 6.

The critical additional information in the Cambridge report is the evidence it provides about false positive tests for people without symptoms as seen in this screenshot: 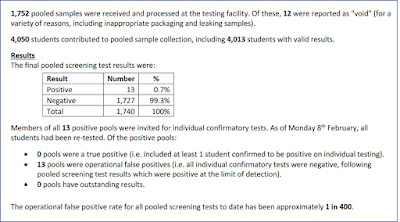 The Government 'case' numbers are based on mass PCR testing and there is no evidence that any confirmatory testing has been undertaken as previously reported on this blog. The mass PCR testing will certainly have a higher false positive rate for people with no symptoms than that at Cambridge.  This is very important for understanding why the Government 'case' numbers - as well as the "1 in 3" claim are exaggerated. Based on the Cambridge data and some other reasonable assumptions it follows that a high percentage of those without symptoms testing positive are false positives (the report will provide the full Bayesian analysis).

All COVID-19 articles on this blog