A critique of the BBC2 documentary “Unvaccinated”

Before this programme was screened on 20 July 2022 promotional material from the BBC and in newspaper articles such as this suggested it was going to be extremely biased and inaccurate. 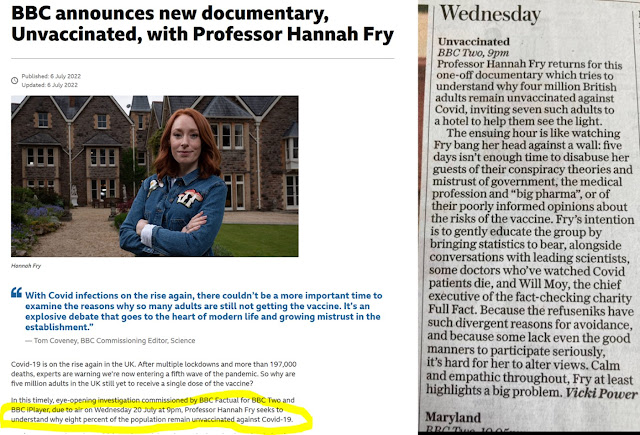 Based on this publicity material we already wrote articles first criticizing the claim that only 8% of the UK adult population was unvaccinated and then highlighting the fact that the publicity material failed to reveal the blatant conflicts of interest of the key ‘experts’ used in the programme to convince the seven unvaccinated participants to get vaccinated.

Our pre-screening articles and tweets about the forthcoming programme were very widely read and one of the participants Nazarin contacted us to express her serious concerns about the way the programme was made – and how it might be edited – and to confirm that the participants were indeed not informed of the experts’ conflicts of interest (this is covered well in this article by threadsirish).  (Note: see update below on the thoughts of another participant who contacted us).  Her subsequent tweets, such as the following, made clear her extreme concerns about the programme even before it was screened: 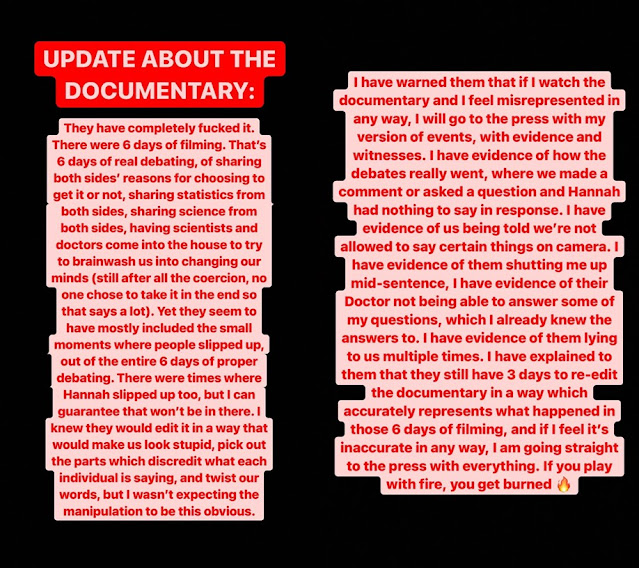 The programme turned out to be every bit as bad and biased as feared.

Many of the problems have been highlighted by the especially vocal participants Nazarin and Vicky (see their interviews with Dan Wooton and Sonia Poulton). Below we summarise our key concerns and what was missing.

Update 25 July 2022: One of the other participants of the documentary, Mark Dabbs, has contacted us wishing to make his views about the experience public. Mark is the person whose allegations he was inappropriately touched by former deputy chief whip Chris Pincher contributed to Boris Johnson's resignation. He told us the following:

"I saw the reviews on the show we did and you know the crux of it was correct. Being one of the seven I agree somewhat with some of the people who said the show was hi-jacked by two of the more outspoken participants – I know because I was there doing it and with them for five days.

The whole time we were there it was like being taken over by a couple of people who seemed to take things so personally.

It was me who participated in eating the dog food from the dog food tin – omitted, ate from the dirty nappy – omitted, when we were asked to take a flo test six of them baulked and I volunteered to do it straight away, as in the hospital I have encountered this sort of lethargy before and that was what we got. None of that was used, so why get us to do it?

I got to thinking why did some of them come if they were not going to participate.

The whole fact checker furore ended up in a big fight and we all stormed off – I went for a run to clear my head and headed to the church across the way when I had finished. Two others had sought sanctuary there too!

After the big fight we were all interviewed separately and after that I swore a lot – they cut that bit too!!

I felt terrible for Hannah and when I saw her cancer journey a month later I was even more sad for what she had to put up with."