The UK Government's own data does not support the claims made for vaccine effectiveness/safety.

In a previous post we argued that the most reliable long-term measure of Covid-19 vaccine effectiveness/safety is the age adjusted all-cause mortality rate. If, over a reasonably prolonged period, fewer vaccinated people die, from whatever cause, including Covid-19, than unvaccinated people then we could conclude that the benefits of the vaccine outweigh the risks. We also pointed out that, to avoid the confounding effect of age, it is critical that data for each age category is available, rather than the aggregated data because, clearly, aggregated data might exaggerate vaccine mortality rates if more older people, with shorter expected mortality, are included. The UK roll out of the vaccine was executed in descending age order, from older to younger, except very early on in the vaccination programme when the vulnerable young were vaccinated along with the very elderly. As the programme progressed those vaccinated were, on average, older than those who remained unvaccinated and as the roll out proceeded a progressively higher proportion of the residual unvaccinated population are younger.

The  latest Office for National Statistics report on mortality rates by Covid vaccination status provides data on all deaths – Covid related and non-Covid related for the period Jan-July 2021 for the unvaccinated and the different categories of vaccinated ('within 21 days of first dose', '21 days or more after first dose', 'second dose'). The ONS data for Covid-19 mortality, is given in Table 4 of the ONS spreadsheet and the ONS data for all-cause mortality excluding Covid-19, is given in Table 5 of the same spreadsheet. Both tables are reproduced at the bottom of this post.

We believe there are severe weaknesses and possible errors in the ONS data (see foonote**). But importantly, while it does not provide the raw age categorized data, it does provide "age standardized" mortality rates*** (also see explanatory video). This means the ONS have calculated the overall mortality rate in a way which (they believe) adjusts for the confounding effect of age, and this is ‘baked into’ the mortality rates they have published.  However, while they report this age adjusted mortality rate for each of the three separate categories of vaccinated people they do not report it for the combined set of vaccinated people. In our analysis, and in the absence of the actual age stratified data, we compute a population weighted age adjusted all-cause mortality rate by using the ONS’s published population sizes for each of the three categories of vaccinated. This is not ideal because the ONS age adjusted rates are so opaque and are not 'abolute numbers'. However, in the absence of detailed data this should provide a reasonable estimate of what the ONS age adjusted all-cause mortality rate would be for all unvaccinated if they had bothered to report it. We will call this the ‘weighted vaccinated mortality rate’. The data table derived from the ONS data and used to compute this rate is given at the end of this post.

It turns out that, even using this age adjusted mortality rate, the death rate is currently higher among the vaccinated than the unvaccinated.

The trends for the different vaccination categories are also concerning. In contrast to the unvaccinated, the mortality rates for the vaccinated have initially increased from very low initial values, but then have increased, whilst that for the unvaccinated has decreased. The charts below show these patterns.

Since 19 March the double dose vaccination mortality rate has increased week-on-week more or less consistently. The mortality rate for those more than 21 days after first dose increased drastically in the spring (at week 14) and remained high thereafter. Mortality within 21 days of vaccination initially increased but looks to have stabilised, albeit with some noise. We will leave it to clinical colleagues to explain why there are such different patterns.

Because of the limitations and possible errors in the ONS data**, there are many caveats that need to be applied to our crude analysis (including some which are covered in the previous post). But we can conclude that the ONS's own data does not support the claims made for vaccine effectiveness/safety.

It is also important to note that the population of vaccinated people is becoming sufficiently large and representative that the criticality of age adjustment becomes much diminished. We will be doing a follow-up analysis that takes account of this.

* For those who responded to this article saying they did not understand why we focus on all-cuase mortality: 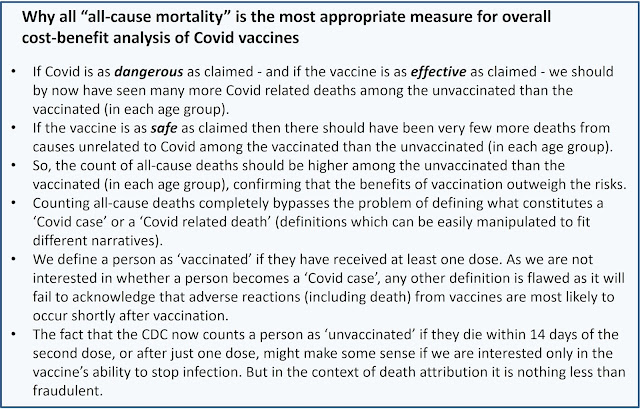 Here is Table 4 data the raw data, for Covid-19 deaths, as provided by the ONS:

Here is Table 5 data the raw data, for all-cause deaths except for Covid-19, as provided by the ONS: